Decided to give the last-ever Sony handheld a shot? Good call, as the homebrew community will likely last years thanks to the Vita being the last of the loved PSP generation. We’ll help you decide which one you should get. † The genuine Vita cable plugs into the power brick with normal USB. You can plug this into modern USB chargers and battery packs, but keep in mind it needs a high voltage USB power supply or it simply won’t charge.

Choice mostly comes down to the following question – Screen or battery life?

The best choice (of course, the opinion of this website) is the second generation. The console is easier to hold, has a more commonplace connector (MicroUSB), and has a small but noticeable increase in battery life. Not to mention that if you want to homebrew it and use Gamecart storage conversion, you don’t need to buy a stupid Sony proprietary card.

The obvious pro of the first generation is it comes with an OLED screen, but it varies with people whether they actually notice the benefits from the screen. Sony killed this off with an LCD display since the OLED was battery hungry. This kind of thing isn’t so much of a problem nowadays since battery packs are dime a dozen, with huge sized packs available for less cost than a Sony storage card.

PS TV? Well, it’s up to you. Quite a few Vita games ended up being incompatible, and PS3’s can be found for about the same price nowadays. 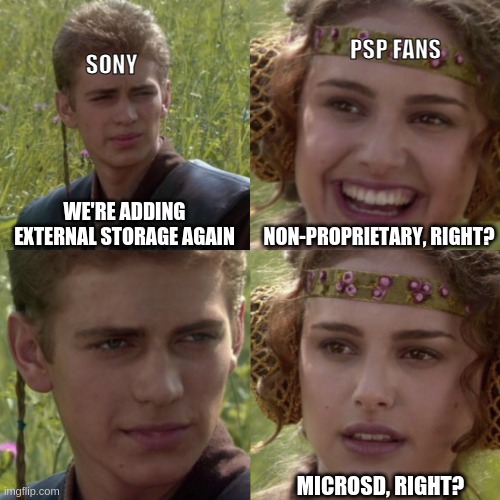 All the parents were probably saying this too…

The specs are pretty good, the device concept is pretty neat, and the fact it can run some Android games was a good winner. You might look at this and wonder why on earth did it fail? Well, Sony pulled a special on this one again – proprietary storage. Outrageously expensive proprietary storage.

Like the M2 storage issue of the PSP, the PS Vita has an adorably small storage card. And adorably small means impossible to build a converter card for it. Unfortunately yes, if you buy a first generation or a PS TV, you will need to buy a proprietary card for your device. You also need one for the second generation, unless you’re only ever planning to play Angry Birds.

This is marked as one of the main reasons the Vita failed. And otherwise, especially for the time this handheld was a true competitor, technically even stronger than the PSP was. But corporate greed took over and crippled the usefulness of the device.

Yes, but a sacrifice must be made.

Since the magic hardware wizards weren’t able to build a hardware conversion kit due to the small size, they turned their eyes to something else – the Vita game card slot.

The wonderful tinker wizards created a MicroSD to Vita card conversion card, and the homebrew homies set to work creating a software method of getting the Vita to look for external storage on the Vita slot rather than in the side slot. And it works perfectly.

For this to work you will need to be running homebrew. This isn’t a problem however as all Vitas can be exploited. However, you will no longer have access to your Vita card slot as this is now used for storage. You also still need a Vita proprietary card for first gen and TV models, but you can buy the 2 GB lowest capacity one since you won’t be needing much.

We fully recommend the Vita hacks guide community instructions as a way to homebrew your console, and has a fully comprehensive guide on setting up this storage method.